I’m delighted to welcome multi-talented writer and friend Sara Bain to my blog today with her debut novel, The Sleeping Warrior. I thoroughly enjoyed this unusual blend of fantasy, crime and thriller set in London and the Scottish island of Arran. Sara is also putting her multitude of experience into her new publishing business, Ivy Moon Press. I’m sure both career paths will be hugely successful. Thanks for answering the questions, Sara. 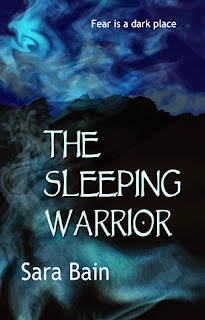 
The Sleeping Warrior
LONDON solicitor Libby Butler’s life is in a mess. Her affair with her boss is going nowhere as is her position in a city law firm. A narrow escape from the knife of south London’s elusive serial murderer, The Vampire Killer, has challenged her outward bravado and left her nerves in tatters.


When duty calls Libby to a police station in the middle of the night, she meets the enigmatic Gabriel Radley. Dressed like an ancient warrior, Gabriel has a habit of disappearing from police custody and danger appears to dog him.
Gabriel is searching for a 'stone', its value 'beyond human imagination', that will help bring a 'monster' to justice. When Libby agrees to help him, she plunges her life into grave danger where no one is safe.


A cult who call themselves The Awakened, a gangland thug and his henchman, a female assassin, a detective chief inspector from Scotland Yard, and even the serial killer, all become inadvertently embroiled in the chase for the stone and the pivotal force of Gabriel.
As the death toll rises, Libby is forced to face herself, learn the true value of life and the potent significance of the Sleeping Warrior within.


The Sleeping Warrior is available from Amazon UK and US, Smashwords and in print from FeedARead It is also up for the People's Book Award!
Hi Sara, Please tell us a little about your background as a writer and why you’ve turned to fiction and publishing.


I’d love to say, like most authors, that I’ve been writing since I was a child, but that would be fibbing. My English mistress didn’t like my stories. She preferred the classical heroes English literature while I had my head well and truly stuffed into the realms of fantasy and the paranormal. I have enjoyed an entire career in the written word in some form or another, however, in particular in editorial. I have been writing fiction for the past 20 years and know the publishing business. Becoming a publisher therefore just seemed like the next natural step in my life.
What drew you to the combination of fantasy and crime?


I will begin with the statement that I am a fantasy writer. That said, my fantasy never seems to fit into the strict confines of genre fiction lists. There’s either not enough magic, or not enough fabled beasts. I got fed up one day and decided to write a novel that would cross as many genres as possible while still maintaining a fantasy element. For some reason it worked. I started with the main ‘fantasy’ character of Gabriel and threw him into a contemporary society, having no idea what he would do. The story just developed into a crime fiction and he took it from there.
Did you have to do a lot of research for The Sleeping Warrior?


I started my professional life as an English barrister so Libby’s vocation was a done deal. My brother-in-law is a policeman and he kept me right on the procedural side of law enforcement as it is today. The rest, apart from the fantasy element and, of course, some of the more unsavoury characters, was really written from what I already know and my own perceptions on life and human nature. I did have to do a bit of research on modern day weaponry (my forté is medieval warfare), which was very interesting. I’ve learned a lot and decided that I really hate guns.
Will there be sequels featuring these characters?


I hope so, but perhaps next year. At the moment I am concentrating on bringing out my epic – or, what I call, ‘my big’ fantasy – if only I had a chance to finish it!
What is the most difficult part about starting a new book?


I don’t find it at all hard to start a new book, the difficulty arises when trying to find time to write it and then finish it. I know that feeling!
How do you promote your book and does it work?


Those are million dollar questions! I have spent the past six weeks guest blogging, Tweeting, Facebooking (can that word even be a gerund?), promoting, marketing and lots of other activities ending in ‘ing’. But it is really hard work and sometimes, when I’m sitting up at four in the morning retweeting the random ramblings of someone I don’t know, I wonder if I will gain maximum benefit from such monumental effort. Someone said that it takes more than eight months for a new author to rise above the parapet of the infinite mound of other authors scrambling for the highest positions on Amazon, and at least 10 reviews. Reviews take time. They take time to find a reviewer who’s not past saturation point; they take time to read; they take time to write; and they take even more time to post. With the benefit of hindsight, I would have started promotion work at least two months before the book was due to be released. I have no idea whether this system works. I’m blogging about it at the moment and only time will tell.
Do you have a favourite writing place?


I’m one of those people that can turn off from the rest of the world and find my own quiet space amidst a clamour of chaos. This is probably because I’m from a big family; have a big family; and am accustomed to meeting tight deadlines in the middle of a loud and busy newsroom. I do have an office of sorts which is really a cupboard where the computer is stationed. This may sound ridiculous, but I am quite computer literate and am very fussy about keyboards. I have to have one of those ‘clicky’ ones; the ones with Cherry Blue MX switch technology that gamers use: you know, the ones that make a proper click when you depress the keys. It’s the noise and tactile feel that helps me concentrate on the task at hand and I honestly don’t notice anything else. I suppose I could say that my favourite place for writing, therefore, is wherever my clicky keyboard is stationed. Love the clicky keyboard idea!
Do you find time for hobbies?

I’m sorry, I’m not familiar with the term ; ) Either that, or it has been a very long time since I had a hobby. I did try and take up knitting last year, just before Christmas. I have these fads that I hurl myself into with considerable enthusiasm but they never last long. I’m afraid that my poor husband’s new Aran sweater with the fancy cabling and bobbles will probably be ready by Christmas 2077 if I can be bothered to pull out the very many mistakes in the knitting and remember how to cast on.

What are your current writing plans?

I plan to bring out my big fantasy at the end of the year which means that the sweater will definitely not be ready for the festive season. I wrote the first book over 20 years ago and it really needed a complete re-write. I’m only just half way through it and am already at 100,000 words, so it will also need a very tough edit.


I would warn any new writer that writing the book is only a small part of the publishing experience. Getting it published and wrestling with edits and publishing systems is the next hurdle, while promotion will take up the main part of the effort. My advice is to produce content of quality. A good story, written well will eventually see the light of day and probably sell itself. Keep the faith and a good sense of humour at all times.


Many thanks or your words of wisdom, Sara, and all the best with your writing and publishing. 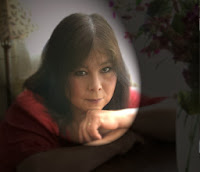 A former newspaper journalist and editor of professional text books, London-born Sara Bain is a fantasy writer who now lives in South West Scotland. The first book of her epic fantasy The Scrolls of Deyesto is due to be published at the end of 2013.


You can find out more about Sara on her website and blog, and at Ivy Moon Press.
Posted by Rosemary Gemmell at 00:24

Great blog post Sara, and I now have another book on my TBR list.
I agree that wrtinig is only a tiny part of it all. I think we must both do the 4am retweet stint
Congratualtions on your achievements...Loking forward to the epic

Thanks for commenting, Raven!

Great interview, Rosemary and Sara. I thought The Sleeping Warrior was a great read and I'll be reading 'The Scrolls of Deyesto' when it appears (even though it sounds as if I'll need a crane to lift it).

Thank you, Rosemary and Sara, for a sparkling interview. I really enjoyed it and The Sleeping Warrior sounds wonderful
I love the thought of a clicky keyboard. It sounds very tempting. x

Fantastic interview Sara and Rosemary. As a new writer, I always admire writers who have more than one book published. :) Lots to learn from Sara, thank you for your gerund rich tips. :) Best of luck with The Sleeping Warrier.

Great interview and lots of luck with the book, Sara!

Thanks for all your wonderful support everyone. Sorry I've been so remiss lately in viewing blogs etc. Time to sit back and start writing the book that will give Bill a hernia!

A super interview. I can't help but to feel more that a little excited when I read about your books and your new publishing venture Sara. You have stormed onto the scene and it's like you have bestseller and success written all over you in stardust!

Thanks, Bill - I want to read that one too!

Hi Uuganaa - thanks for visiting!

That sounds about right, Janice!

Great interview. I think your book sounds great, Sara, and really love the cover. I'm looking forward to reading it.

Excellent interview, Rosemary and Sara. I really enjoyed The Sleeping Warrior - congratulations, Sara, on finishing and publishing it. Looking forward to hearing your progress on the Scrolls.