The Power of Social Media

No doubt we all have different views on the various social media outlets available to writers these days, but I have to say I've mostly found it a positive benefit in this digital age. I've often said that authors who are mainly published in e-book, no matter who is publishing the books, need a good online presence. Many of us don't have the luxury of seeing our books on book store or library shelves so we need to let readers know we exist in some way. Yes, it's a balancing act and most of us would rather not have to promote our own books but the online world isn't going away, so we might as well jump in and have fun where possible! 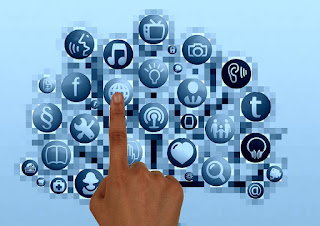 I've met many lovely people on Facebook and Twitter and I do try to engage with people as much as possible, but occasionally the power of social media becomes even more evident without seeking it out. Here are three occasions that worked for me recently.

The RNA (Romantic Novelists' Association) has a weekly tweet/retweet day every Tuesday. All RNA members on twitter can take part and we basically send a tweet of our own news with the hashtag #tuestnews @RNAtweets then retweet any others with that phrase. It means that we are all tweeting at different times of day to hopefully different people. Sometimes, I'm not sure if I want to be retweeted that much in case it looks like spam, but Tuesday is a recognised news sharing day on twitter and I try to make mine different each week. It obviously works on some levels because last week two people said they were going to download my book and I always gain new followers on a Tuesday. I don't often promote my books in between so I don't feel so bad doing it on a Tuesday.

On another occasion, I got into a short chat with an American book reviewer on twitter. The upshot was that she offered to mention my new novella, The Aphrodite Assignment, (and the other two) on her blog. She had too many reviews to get around to but she really did start promoting my book now and then on twitter! Needless to say I was extremely pleased, especially when the offer had come from her. 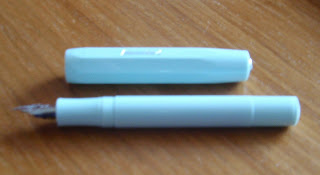 Much to surprised one day, I received an email out of the blue asking me if I would like to answer some interview questions about my writing for the Tiger Pens blog. He had seen me mention how much I enjoyed writing with pen and paper while out and about and wanted to interview me. I'm not sure whether he saw my comment on twitter or on my blog but I was intrigued. The first thing I did was to google the company to make sure it was genuine - it was!

I duly did the interview as it was also going to promote The Highland Lass and he sent me a link to their sales page so I could choose a cartridge pen as a thank you gift. The interview is on the Tiger Pens blog and the photo shows my beautiful little gift. I chose a dinky one in this lovely egg shell blue colour and have now tried it out. Excuse the writing as I usually scribble everything now when not typing!


These are just a few instances of how effective social media can be and I'm sure there are many more. Please share any of your own as it might encourage those who haven't made the leap yet.

I've just seen this morning that daughter Victoria's novel, Follow Me, has had a wonderful new review on the Paisley Piranha blog!

Rosemary
Posted by Rosemary Gemmell at 02:56

I agree there are so many positives to social media,Rosemary. It's probably all about making effective use of the time you have available!

You're right, Rosemary. Social media won't go away. And that's where our readers find our e-books, so we have to work out our best way of using the various media available.

The problem is, of course, time. It's so easy to be tempted to spend long periods on-line browsing through what is on offer. Much of the material is useful, but even if it is, how long are we prepared to devote to it?

Time management is the answer. And perhaps a bit of self-discipline?

I so agree with you, Rosemary, that the benefits are all there if used wisely to ensure social media doesn't take up too much time. I have met so many lovely people, many of them fellow writers, who give wonderful support, and as well as promoting my own books and spreading any news I might have, I have found out about so many other authors' books, and also short story competitions, I would never have known about otherwise. I do try to limit my time on Twitter and spend very little on FB, with some days completely away from both in order to refocus on the writing without distraction, but when I do use social media I find it quite relaxing and a good way to unwind at the end of the day. xx

Interesting post, Rosemary. As you know, I'm more of a blogger than anything else. Even though social networking platforms such as FaceBook and Twitter have their uses, I much prefer the more personal blogging, emailing approach. However, no matter what type of social networking one chooses, success relies on how much effort one puts in. And low and behold that is all very time consuming. So my advice to anyone is choose wisely and don't over extend yourself. Thanks for the thought provoking post, Rosemary.

Absolutely, Myra - I should have mentioned your recent positive contact!

Yes, you're right, Joan - no use spending too much time online and not getting any writing done!

Thanks, Rae - using wisely is the way to go!

Thanks for that wise comment, Joanna - I think meeting fellow writers is one of the positive reasons for using social media. I loved meeting lots of blogging friends in real life at the RNA conference for instance.

Yes, that's a good comment, Nicola. Everyone seems to be in agreement that we need to use it wisely and limit the trim on it! I would agree that blogging is quite different from FB and twitter, so I think we should only use what suits us so it doesn't become a chore.

Enjoyed your post, Rosemary, and hearing the latest successes via social media- shows it works.

For writers I think the good outweighs the bad, though the time it takes up can be difficult.

I use social media to follow writing related organisations worthwhile, as news about opportunities, events, talks, conferences or workshops often get mentioned on Twitter before Facebook, or in their newsletters.

Like social media or not, you have to embrace it. As well as being a way to promote my story collections, FB, Twitter and my blog have helped me engage with many lovely people (you included).

Sorry I hadn't replied to your comments, Carol and Wendy! You both make very good positive points, thank you.