Well, I've definitely got back into the writing zone this week and I'm sure it has something to do with autumn arriving - and holidays being over! I love this period when the nights draw in and my imagination begins to stir again. 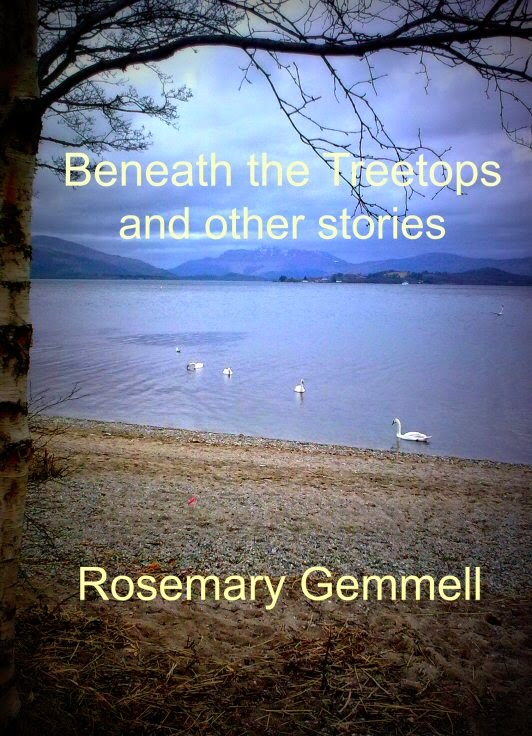 So before I get completely into the next couple of projects, I thought I'd put together another small collection of my short stories on kindle: Beneath the Treetops and Other Stories. I chose eight about relationships or choices that have a bit more emotional depth. They are either previously published or have been mentioned in competitions.

I decided they might as well be out there rather than sitting on my computer. The first collection, Reshaping the Past, was my very first experiment on kindle a few years ago and it's still out there - it also has eight stories, mainly published, with a couple of prize winners. I might put all sixteen together in a print collection eventually as that's handy to have for talks, conferences and so on.

I've never forgotten the kind comments from the late Ian Sommerville, editor of My Weekly, when he bought my very first short story at the Scottish Association of Writers Conference many moons ago. He told me I should always write stories with such emotional depth as that first one. Although I write a great variety of story themes now, I think he was probably right as the novel coming out next year has more emotion than my other novels. But it's also good to experiment with writing!

If anyone wants to have a look, Beneath the Treetops is on Amazon UK at only .77 pence and on Amazon US at around $1.

Now I'm off to start putting together the next newsletter. If anyone wants a copy emailed to them, you can subscribe to it in the box on the side of the blog - I usually try to feature at least one publishing opportunity, market and competition as well as news.

Posted by Rosemary Gemmell at 01:26

Email ThisBlogThis!Share to TwitterShare to FacebookShare to Pinterest
Labels: Beneath the Treetops, Short story collection

I'm looking forward to reading these stories, Rosemary. I suspect I may have read (or heard) some of them, but I'm sure I'll enjoy reading them again.
Such a good idea to publish them as a collection.

Thank you so much for your lovely comment, Joanna - and your continuing support! Really appreciate it.

Many thanks, Joan - hopefully one or two might be new to you!

Sounds like a good collection to get for a satisfying read, Rosemary.
I like stories with emotional depth, so this will be on my TBR pile. :)

That's very kind of you - thanks, Wendy. I think you've overtaken all of us on the short story writing now!

Thanks, Carol- I do hope they don't disappoint!

What a lovely looking book with a gorgeous cover. I received your lovely newsletter today - it is one of the nicest things to land in my inbox :-) x

Good Luck with the book, Rosemary. I love the cover picture - it looks so peaceful and tranquil.

I will be getting this for kindle soon, Rosemary, love that picture. Look forward to reading.

Sorry - once again, I seem to have lost a couple of my replies!

Thank you so much for that lovely comment, Teresa!

Thanks a lot, Susan!