It’s a real pleasure to welcome Patsy Collins to the Reading and Writing blog today as we’ve been blogging friends for some years now. Patsy’s own blog is great for keeping us up to date with free competitions and she has now taken over the excellent womagwriter blog. But Patsy is also a well published short story writer and the author of several novels and she has kindly agreed to share a little about the inspiration behind her latest novel, Firestarter. First here’s the basic story. 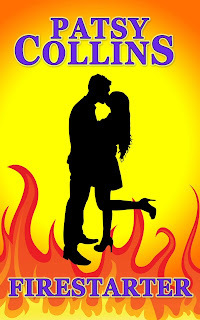 Alice has a fantasy. It starts with being rescued by a hunky fireman, involves the kiss of life and ends in him not needing his uniform. At the New Forest Show, Alice is offered an innocent version of her dream. Reluctantly she turns down fireman Hamish's invitation.

Is Alice really in danger? What is Kate up to? Can Hamish possibly be as perfect as he seems? It takes Alice masses of wonderful food, disgusting wine, smelly mud, red footed crows and steamy Welsh passion, but she finds the answers. And rethinks her fantasy.

Firestarter is available from Amazon in your own country.

Welcome, Patsy – it’s great to see you here and thanks for writing a guest post.

Thank you, Rosemary for inviting me to talk about the inspiration behind Firestarter.

Inspiration Behind the Story

As is often the case with my stories, I don't know exactly what prompted it. Maybe I just have fit, hunky firemen lurking in my subconscious? *concentrates* Nope, can't see any more.

I do know I enjoy reading crime stories and that what we read feeds our imaginations. My previous novels each included crime elements and I was keen to write more in that vein. That explains the hoax calls to Hampshire Fire Service. Obviously such calls don't make themselves. Once I added a few suspects and worked out the motivation for the guilty character, I had half the plot.

From the start I planned my lead character to have... let's be tactful and say a 'strong interest' in firemen. To be fair, Alice hardly ever drools in the presence of the emergency services, despite her sister's claims. Alice recognises her fantasy for what it is and, although tempted, doesn't throw herself at fireman Hamish.

Alice and Kate's relationship was inspired by mine with my brother. We tease each other. We've got each other in trouble and fallen out, but we know the other is there for us if we need them. Kate was a real help when writing Firestarter. She stirred things up, gave Alice someone to confide in and added humour. Even though we have to create them first, I believe our characters can inspire us. As we get to know them we see their limits and possibilities.

Both the main antagonists in the story would, I felt, work hard to get what they wanted. One has clear boundaries which he'd only cross under great duress. The other doesn't. Pushing one towards the edge and allowing the other to wander freely across it and watching what happened provided plenty of material.

My husband, Gary, and I have been together fifteen years but I remember how I felt, in the months beforehand when he thought we were just friends, and in the early stages of our relationship. He wore a uniform in those days and there were good reasons for us to take things slowly. That inspired the early stages of the romance in Firestarter. (We're both maintaining a strict 'no comment' policy with regards to the activities at the end of chapter 15.) 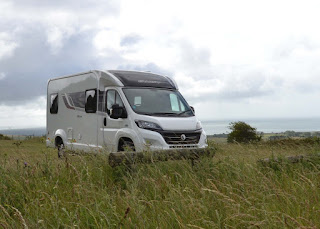 Gary also provided inspiration for the settings. We have a campervan which is our mobile office. When possible, I write stories where they're set. Gary's work means we spend a lot of time between Calshot and Southampton, the New Forest, at Portsmouth Harbour and on the Welsh coast. It seemed sensible to set the action in these places.

Both Southampton and Portsmouth are good for girly shopping trips and eating out, which suits Alice. The locations are also excellent habitats for birds and other wildlife. Spending hours in the van writing gave me plenty of opportunity to observe them. (For those who don't know, writing involves a lot of staring out the window.) The more birds I saw, the more interested in them I became. The same is true of Alice, although in her case knowing Hamish volunteered at a wildlife sanctuary between shifts with the fire brigade was the inspiration for her first taking a look. 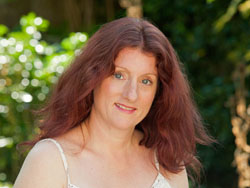 Patsy Collins is a novelist and short story writer. Hundreds of her stories have been published by magazines such as Woman's Weekly, Take a Break's Fiction Feast, My Weekly and The Weekly News as well as in Australia, Ireland, South Africa and Sweden.

Firestarter, a romantic comedy, is her fourth published novel. It was written on location in Hampshire and the south coast of Wales.

You can connect with Patsy on her website; blog; womagwriter
Posted by Rosemary Gemmell at 00:59

Thanks so much for hosting me, Rosemary.

You are fortunate you get to travel with your husband like that. (Congratulations on fifteen years of marriage.) And no, I will not ask about chapter fifteen.
Congratulations, Patsy!

I really enjoyed finding out more about you through Rosemary's blog, Patsy. I love the blurb to your latest release. It sounds a great story!

@ Helena - Thank you! It was interesting for me thinking through my inspirations as that's not something I often do.

Enjoyed reading a bit more of the background to Firestarter. And I'm looking forward to it arriving on my Kindle 5th November. :-)

Thanks you, Rosemary, and Patsy.

@ Carol - Hope you enjoy reading it.

Fascinating. I love knowing what ispires a story. I smiled at Patsy's comment about much of a writer's time spent staring out of the window - so very true.

Firemen are hot! Sounds like a fantastic read to me. :D

@ Mary - it's the way we stare which makes it creative.

Many thanks for all the lovely support and comments for Patsy - Firestarter does sound like a great read!

Sounds like a great story. You had me at 'fireman'.

Love the campervan and the settings. I have a feeling you really enjoyed researching and writing this one, Patsy. And I think you could start a series of men in uniform. Maybe a policeman, no, he's in Year and a day, a soldier or naval officer next maybe? You'll just have to do the research to see what your readers want:))) Great post, Rosemary.

@ Julia - they do seem to get some women that way.

@ Suzy - you're right, I did enjoy working on Firestarter.

Thanks for dropping in, Julia and Suzy!

Next time we meet Gary I'll ask him about chapter 15 (I won't tell anyone else of course). The very best of luck with Firestarter. A hunky fireman... what's not to like?

Thanks for dropping in, Wendy!

Sounds a great read, Patsy and really enjoyed reading about the inspiration behind the story!

@ Wendy - you'll get to see his innocent expression (it's very convincing)

I think that its one of the best books. My girlfriend it totally in love with them. I also think that you should check out some argumentative transition words from this blog article. they are gona be useful